When disasters strike, people are not the only victims: reflections on the ethics of disasters and the animal ethics 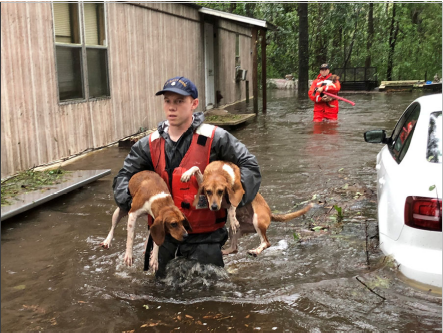 When disasters strike, people are not the only victims: reflections on the ethics of disasters and the animal ethics

During a natural disaster such as floods, droughts, fires and hurricanes, usually the first thoughts that come to our minds – as ordinary citizens who do not work in areas specializing in crisis management – are that we must protect our lives and property, right? But what kind of life are we talking about?

As a Researcher in Ethics in Public Administration, focusing on emergency management, I came across several times during my field research with reports about people who refused to leave their homes during disasters, such as “Morro do Baú” and neighboring cities that occurred in Santa Catarina, Brazil in 2008. In some cases, people refused to leave their property for fear of robbery and abandoning animals such as pigs, cattle, etc. These reports first caught my attention because of the difficult dilemma between staying in home and taking care of everything that was built over the years, risking your own life, OR leaving the property to ensure your safety? What happens to everything that lies behind and cannot be removed easily or fast? Between personal property and heritage, full of stories, can also be left behind other lives, not necessarily human…

It is only recently, while living temporarily in Florida in the United States to conduct another part of my research, that the situation of animals – especially hurricanes – and the various moral dilemmas that may arise in these tragedies became more apparent to me. In the last two months (September and October), two hurricanes made landfall in the US east coast and caused much damage and loss of human and nonhuman lives (Hurricane Florence and Michael Hurricane).

During the first hurricane (Hurricane Florence), a report called my attention: “Saving pets without a permit: Good Samaritan arrested after helping animals survive Florence.” The report explains that at the height of the storm, this woman saved the lives of abandoned animals in North Carolina and took them to her nonprofit rescue center. However, she was arrested because she did not have the correct licenses to care for the animals: her facility was not legally registered as a shelter. In addition, she was also accused of having given drugs to animals that were injured without a veterinary license. (In other reporting you can see other rescues being carried out: click here)

After this case, I came to follow other reports and reports that dealt with animals during disasters and try to reflect on the ethical aspect present in these situations. In addition, recently, Santa Catarina (my home state and research in Brazil) has approved a new law that recognizes dogs and cats as sentient beings, as in countries like France, Portugal and New Zealand. So what kinds of assists should animals receive in disasters? As? And what animals?

Also in another report about the same hurricane, one of the interviewees says her boyfriend chose not to evacuate the city, even though she was on the hurricane route: “He stayed because we have five horses, one donkey, dozens of chickens, dozens of pigs, and five dogs. […] Finding shelter for one dog or cat is hard enough but to find shelter for a lot of large animals is hard. […] Transporting those animals is another challenge.” Reflecting on how this process would be, the interview questions “How do you only pick three of your horses to save? […] You can’t choose your favorites. They’re like family members.” Some cities have specific shelters that accept pets, such as dogs and cats. But what to do with others?

This reflection and preparation needs to be part of risk and disaster management, both by the population and by emergency managers, since animals are at risk of dying if they are abandoned during evacuations (whether planned or not). Moreover, when they survive, animals can suffer irreversible traumas.

It is also worth remembering that, most of the time, the animals did not choose to “be on the route” of the disaster. As stressed by sociologist Leslie Irvine in her book “Filling the Ark: Animal Welfare in Disasters”, humans are responsible for most of the risks faced by animals and thus should also be responsible for better decisions about their treatment, for example, through different disposal and use policies that put them at risk, such as for consumption and experiments.