Virtues and utilitarianism: an impossible dialogue? 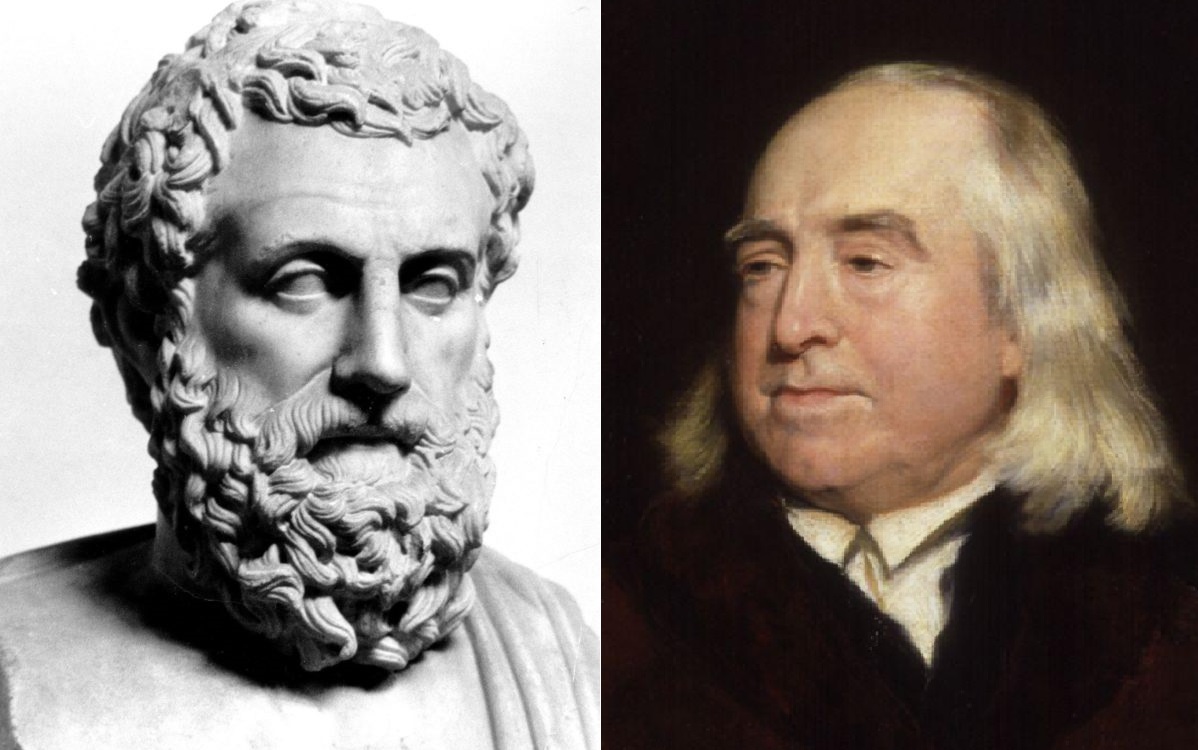 Virtues and utilitarianism: an impossible dialogue?

At first sight, utilitarianism and virtue ethics are absolutely incompatible currents of thought: utilitarianism calls for a principle of maximization, to an instrumental calculation of consequences as a criterion for the classification of moral acts, while virtue ethics requires careful analysis of the situation and the context in which the agent finds himself to determine the extent to which a particular trait of character should guide the action. In this way, an utilitarian agent would probably choose the same action if the situation were repeated, but a virtuous agent could act in different ways in each one.

On the other hand, there are some similarities between the two currents of moral thought: first, both appeal to reason, and not to emotions or feelings, to define what is moral; in this sense, both are far from the appeal to moral sentiments that Scottish Enlightenment thinkers like Hume and Adam Smith have defined as the basis of morality. Second, both place happiness as the goal to human action, even if what they understand as “happines” is different: if for utilitarians it would be the maximization of the difference between pleasure and pain, for the virtue ethicists, happiness resides in a life according to reason. Finally, it is necessary to mention the most obvious aspect: in stark contrast to deontology, both consider the consequences of the act as a criterion for moral action, although in the case of virtue ethics this is not as clear as it is in utilitarianism.

Given that, is there, in fact, any way to make the ethics of virtue compatible and utilitarian? In this short essay, some arguments will be examined not in order to solve the puzzle, but to provide elements for further reflections. The first of these arguments is presented by Foot (1985), who considers the two ethics incompatible; the second points to a special form of utilitarianism (KILCULLEN, 1983), in which certain virtues are promoted by their compatibility with the utilitarian principle; the third argues that the ethics of virtues must incorporate reasoning about consequences (RUSSELL, 2014); finally, the more radical point of view proposes the compatibility of the two currents (CRISP, 1992).

Philippa Foot, one of the best-known contemporary advocates of virtue ethics, criticizes the possibility of conciliation between the two moral currents here dealt with. The author begins her approach by claiming to be remarkable how utilitarianism haunts even those who do not believe in it, as if people feel it is correct even when they insist it is wrong. For her, the fundamental error of utilitarianism consists in its consequentialism (although this is exactly what makes it so attractive); in other words, the error consists in adding the well-being produced by the action in other people, a problem that, despite all attempts to correct it, remains in each reformulation of utilitarianism. According to Foot (1985), the basic problem is that a person cannot decide from an impersonal point of view what would be the best state of affairs to be produced by her action when she’s trying to decide how to act, but that impersonal point of view is exactly , when deciding to act, to consider what would be the best state of affairstobe produced by his action, when it is impossible todo so from an impersonal point of view – and that is what must be demanded.

Given this frame, Foot states that it would be necessary to consider the virtues for the definition of action; in particular, justice and benevolence appear as more appropriate guides of action to generate the “better state of affairs” than the consequences. In particular, if we consider benevolence as the good of others, the moral actions motivated by it would produce good consequences without the need to consider utilitarianism. The virtues, for the author, are related to the purposes of human action more than to the observation of rules. Moreover, virtues legitimize moral action through an internal criterion to the action itself, while the consequences are external (because are products of action). It can be concluded that, according to Foot (1985), virtue ethics not only does not need any utilitarian consideration, but is still capable of providing a superior guide to moral action.

John Kilcullen (1983) states that, for John Stuart Mill (1806–1873), virtue can be regarded as an end in itself, above one’s own happiness, because it is capable of guaranteeing certain modes of conduct or feeling that benefit the moral agent the most in cases where virtue and happiness conflict. In this case, Kilcullen says, it takes an agent’s commitment to virtue itself, not because of the effects it could produce; a moral agent should selflessly seek virtue as a “guarantee” of her action: by being virtuous, that agent simply disconsiders any advantages that may arise from wrong action. Thus, Kilcullen’s argument calls for a certain kind of utilitarianism of rules, in which the maximization of well-being or happiness is produced by adhering to virtuous behavior; it is not, as the author points out, a pure consequentialism, but rather of recognizing that actions are good for their effects as much as for developing and preservinguseful dispositions. A “virtuous-utilitarian” agent (a term Kilcullen does not use, by the way) would be a reliable person, acting in a certain way even when there are advantages in acting in another.

At this moment, one can analyze the positions that defend the dialogue between the two currents of thought. First, I present the compatibilization suggested by Daniel C. Russell, who organized the Cambridge Companion to Virtue Ethics, published in 2013, and contributed to the volume of the same collection dedicated to utilitarianism. In this essay, he states that the two philosophical traditions are very different, but although he defends virtue ethics, there’s a lot of things this current can learn from utilitarianism. First, Russell (2014) states that thinking about the consequences of action should not be confused with consequentialism, and argues that virtue ethics must think about consequences, because an important part of virtuous action refers to seeking certain results instead of others (for example, in generosity, what matters is to do things that really help others). Thus, thinking virtuously about the consequences is important, and involves determining what consequences of action really matter, morally speaking.

Russell (2014) also advocates the use of practical intelligence about consequences: generosity, as a virtue, is a goal, but one must know how it works, which requires thinking about its consequences. He recalls that the search for a virtuous goal must be reflected bearing in mind that in doing so, other objectives cannot be pursued; in a situation of limited resources, defining between two virtuous objectives (such as donating money for the purchase of medical equipment or for books for the library) requires practical intelligence, as well as an understanding of the results of each virtuous action. Russell concludes his article by stating that, even though he is not utilitarian, he believes that there is no virtue without practical intelligence, and this involves careful thinking about the consequences; for the author, costs and benefits are not always the right criteria for deciding how to act, but the results of the action are often what matters, and so virtue ethics have much to learn from utilitarianism.

A more radical point of view, however, is possible. Roger Crisp (1992), another author known for his contributions to virtue ethics, states that utilitarianism, when considering morality from the production of utility, tends to distinguish between a criterion of moral correction and a decision-making procedure, focusing on first; for him, this moral current fails as a decision-making procedure. Crisp (1992) states that utilitarianism confers the same weight on people’s interests and preferences and advocates its equal treatment, evaluates different positions about it, and defends a vision he called “Biographical Utilitarianism” (BU), which derives from Foot’s critique (1985) to utilitarianism and leads to a moral principle that can be synthesized in the formula “any individual ought to live in such a way that the total amount of utility in the history of the world is as close as possible to the maximum”, that is, for each person, if she lived in such a way that the total utility in the history of the world is less than it could be, her life would have been worse than it could have been. In the light of this principle, each person should live in a way that chooses actions that maximize utility, always keeping in mind the motivation to benefit others impartially, but this only serves to define whether the actions are morally correct, and does not serve as a decision-making procedure.

As a solution, Crisp (1992) suggests a “utilitarianism of virtues” (UV), whose basic principle postulates that the agent must act virtuously and adopt the BU only on certain occasions. For the author, utilitarianism is not opposed to virtues, although some theories about virtues are incompatible with it. BU can be seen as an objective theory that demonstrates how a certain type of life can be right or wrong, while UV relates to decision-making processes, becoming a subjective theory of maximizing utility. Crisp (1992) states that the utilitarianism of virtues can maximize utility, so BU would recommend its action. A life of virtues, says the author, is the true moral life, which must adopt interest in others and sensitivity to their desires and needs as foundations for reasoning.

In view of the above, it can be seen that, from Foot’s radical opposition to utilitarianism, with the defense of virtues in its place, one can reach a complete compatibilization such as Crisp’s utilitarianism of virtues. Among these two proposals, one can find Kilcullen’s defense of the use of virtue in utilitarianism and Russell’s adoption of consequential thinking in the ethics of virtues. Crisp’s compatibilist proposal is apparently too radical for the “pure” ethicists of virtue, but Kilcullen and Russell’s solutions point to the use of the “tools” of one ethical philosophy in the context of the other, which can produce good results in terms of moral reflection. Both virtue and utilitarianism is the same have the same objective, that is, happy life; how to achieve it may be different, but, as it’s said in Brazil, “if all roads lead to Rome”, one might think that at some point those roads actually cross each other.