Entrepreneurship: The Blind Men and the Elephant 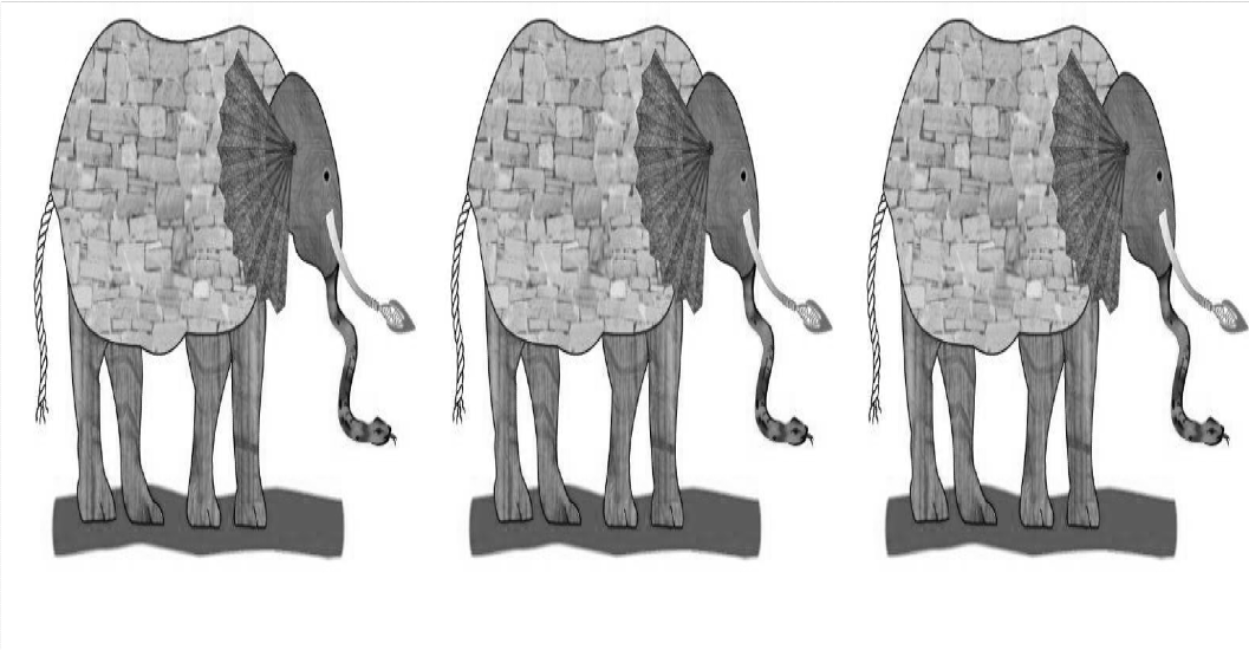 Entrepreneurship: The Blind Men and the Elephant

In this series of 3 chapters, we will present entrepreneurship through its three main Schools: Economic, Behavioral, and Managerial. The parable ‘The blind men and the elephant’1 is used throughout the chapters – we adapted some parts for the didactic purpose.

In a city in India, there were six wise men, all blind. Because they were wise, everyone who had problems consulted them. Although they were companions, there was a certain rivalry between them, from time to time, they argued about who was the wisest. One night, after much talk about the truth of life and not reaching an agreement, the sixth man was so upset that he decided to go live alone in a cave on the top of a mountain, saying to his companions: ‘We are blind so that we can hear and understand the truth of life and advise the needy. Instead, you stand there arguing, as if you want to win a competition.’ The next day, a king mounted on a large elephant arrived in the city, which he used for heavy work and to frighten his enemies in battle. The blind men had never touched this animal and ran to meet it.

In today’s chapter, the first of the three Schools will be presented: Economic School.

The first man, feeling the air, grabbed the elephant’s trunk. The surprised elephant started to move its trunk. The wise man, in turn, frightened, exclaimed: ‘This elephant is like a snake, but very large and agitated.’

Entrepreneurship arises through the writings of economist Richard Cantillon (approx. 1680-1734), a French-Irish banker whose work ‘Essai Sur la Nature du Commerce en Général’, published posthumously in 1755, linked entrepreneurship to the economy and the entrepreneur to its role in economic development. The economist acknowledged that the discrepancies between demand and supply in one market create opportunities to buy at one price and sell at a higher one. He called those who receive a call to exercise their business judgment and take advantage of unrealized profit opportunities as an entrepreneur (HÉBERT; LINK, 1989; LANDSTRÖM, 2005).

The entrepreneur is considered a protagonist of economic activity (STEVENSON; JARILLO, 1990) who engages in market exchanges to make a profit (HÉBERT; LINK, 1989). Still, in Cantillon’s definition, there is an emphasis on risk: entrepreneurship is seen as a matter of foresight and willingness to take risks (LANDSTRÖM, 2005).

Changes took place slowly in this period and, gradually, new conditions of production and new forms of social relations began to exist, which helped in the emerging a new way of thinking. This new way of thinking had Adam Smith (1723-1790) as one of the main responsible. His writings laid the foundation for modern economic theory, however, the author does not differentiate the entrepreneur from the capitalist, consequently, the failure to isolate the entrepreneurial function from capital ownership has become standard practice among classical economists (LANDSTRÖM, 2005).

After Adam Smith, the French economist Jean Baptiste Say (1767-1832) was responsible for returning to the question of entrepreneurship distinct from the capital. Dividing industrial development into three different activities, he differentiates research, entrepreneurship, and production. The first is conducted by researchers to generate knowledge: the transformation of this knowledge into usable products is a function of the entrepreneurs, who are also responsible for organizing the factors of production, and, finally, the production is carried out by the workers. In Say’s view, the entrepreneur was the one who organized and combined means of production intending to produce goods. However, the function did not occur ‘by chance’, the entrepreneur should develop a good or service that provides some form of value or utility and, like Cantillon, also recognized the risk involved in the function (LANDSTRÖM, 2005).

One of the most well-known and used definitions to this day – considered the most cited definition within the field of entrepreneurship – was coined by Joseph Alois Schumpeter (1883-1950) (FERREIRA; PINTO; MIRANDA, 2015; FERREIRA; LOIOLA; GONDIM, 2020). In his book, ‘Theory of Economic Development’, published in 1911, the author builds a new economic theory addressing topics such as the importance of capital, the creation of wealth, and economic cycles. Considered the father of entrepreneurship, his writings on the phenomenon had a great impact while his other thoughts were not easily accepted within the economy (LANDSTRÖM, 2005).

According to Schumpeter (1982), the economic system is predominantly in balance and what makes economic growth happen is not the accumulation of capital, but innovation, which arises from the process of ‘creative destruction’. Once started, the destruction creates the desire to consume something that until then did not exist, generating and changing consumption habits. Innovations, also called new combinations, can be new products or services, new production methods, new investment goods, new organizations, and/or new markets (SCHUMPETER, 1982; LANDSTRÖM, 2005).

The studies before Schumpeter are considered Classical studies and, after him, entrepreneurship followed three main intellectual traditions: the German School, the Austrian School, and the Chicago School (HÉBERT; LINK, 1982).

Schumpeter (1883-1950) was the founder of the thought of the German School, having his studies continued by Cole (1889-974), who maintained the original ideas of the famous economist, having innovation as the essence of entrepreneurship (CUERVO; RIBEIRO; ROIG, 2007).

The Austrian School is represented by Kirzner (1930-) based on the studies of von Mises (1881-1973) and von Hayek (1899-1992) (LANDSTRÖM, 2005). Austrian thinking differs from German thinking mainly in the matter of market balance. Instead of creating imbalances, the entrepreneur, for the Austrian School, seeks existing imbalances and attempts to rebalance the economic system (KIRZNER, 1979).

The term ‘entrepreneurial alert’ was coined by the school’s scholars and means that the entrepreneur needs to be alert to discover such imbalances, which are considered opportunities that will result in profit. However, the discovery of opportunities is only possible due to information about the needs and resources of different actors that help the entrepreneur to coordinate resources more effectively and, consequently, lead their processes towards balance (KIRZNER, 1979; LANDSTRÖM, 2005).

Therefore, for the Austrian School, the entrepreneur is the one who has superior knowledge of market imperfections and his function is the destruction of these imperfections or imbalances, through the perception and exploitation of profit opportunities, thus generating balance within the market economy (CUERVO; RIBEIRO; ROIG, 2007).

The Chicago School, also known as neoclassical, is represented by Knight (1885-1972), who takes up the question of risk and uncertainty, which arose within classical studies (HÉBERT; LINK, 1982). In his thesis, ‘Risk, Uncertainty and Profit’ (1916, revised in 1921), Knight deepens the issue and proposes three classifications: risk, uncertainty, and true uncertainty.

The risk exists when the results, although uncertain, can be predicted with some degree of probability, that is, the future can be known and quantifiable. Uncertainty arises when the probability of the results cannot be calculated, that is, the future is unknown and can be estimated from studies of probabilistic events over time. True uncertainty, or Knightian uncertainty, occurs when the future is not only unknown but also unknowable, with unclassified instances and a non-existent distribution of results (SARASVATHY et al., 2003).

This school considers that entrepreneurship is characterized mainly by true uncertainty because, if the change in the market is predictable, there is no opportunity for profit. Thus, the entrepreneur receives a return for making decisions in conditions of real uncertainty and his main capacity is to deal with it (LANDSTRÖM, 2005).

In short, the studies of the Economic School are subdivided into four traditions: Classical studies, the German School, the Austrian School, and the Chicago School. Table 1 presents a summary of these traditions.

For the scholars of the Economic School, entrepreneurship is at the root of economic improvement, stressing the implication that ‘the more enterprises, the better’ (STEVENSON; JARILLO, 1990), explaining the economic profit through the entrepreneurial function (VECIANA, 2007 ). In the next chapter, we will talk about the Behavioral School, don’t miss it!

1 The origin of the parable is unknown, some attribute it to Hindu, Jaina, or Buddhist culture. The first version of the traceable appears to be in the Buddhist text Udana 6.4, dated to the middle of the first millennium B.C. However, it is believed to be older than the Buddhist text itself. Its popularity rose through the poem by John Godfrey Saxe (1816-1887).