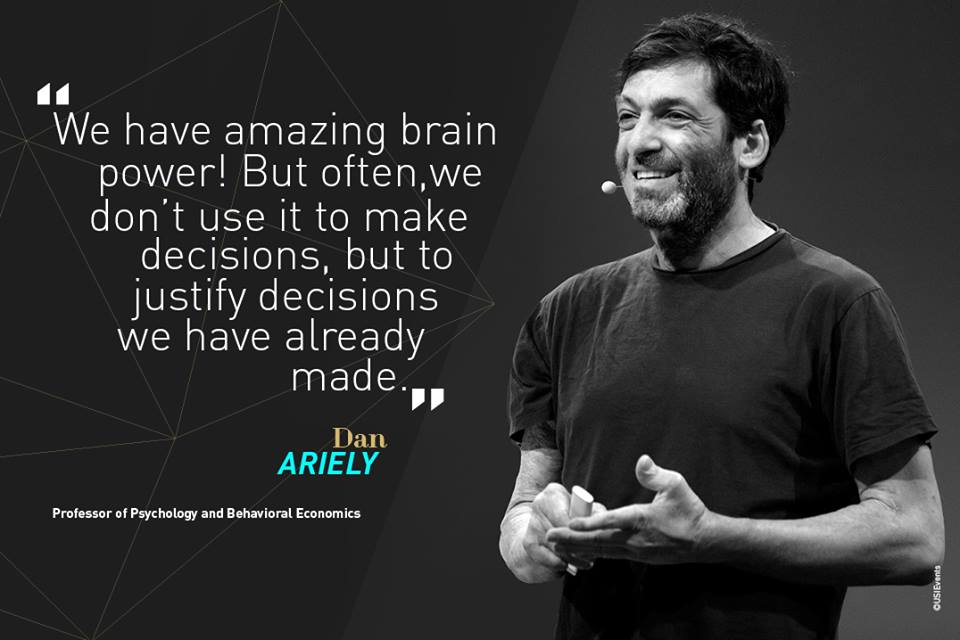 Dan Ariely is a senior fellow at the Kenan Institute of Ethics at Duke University. He is also a professor of psychology and behavioral economics at Duke University, where he has been working since 2008. American of Israeli origin, was born in 1967 in New York, became interested in the irrationality of daily behaviors, influenced by the lack of consistency in the preferences of individuals, while recovering from injuries resulting from an explosion that left 70% of his body burned. The way the nurses changed their dressings and gave him a bath led him to think about how human beings make wrong decisions in a predictable and repeated way, deciding to focus their research in a way that could identify and help change those patterns.

Through simple and accessible language, Dan Ariely seeks to convey the results of his research to the general public. His work inspired the documentary “(Dis) Honesty – The Truth About Lies,” which explores how and why people lie. In this documentary, Dan Ariely shows his experiments to understand human behavior, without making assumptions he immerses people in situations and analyzes how they behave and the propensity to lie. In addition, it presents real cases, where people share their experience with lies they have told (often considered small) and the result of this action. In one of these analyzes, Dan Ariely notes the change in the number of people cheating before the test, which will be submitted, whether codes of ethics and codes of honor are presented, even concluding that in general people do not cheat if they have that remember the Ten commandments (present in the Bible), even among atheists and agnostics. In addition to this documentary, Dan Ariely also appears in videos he shares on his YouTube channel, having also contributed through Ted Talks.

He has also published several books, including: Irrationally Yours (May 2015), The Best American Science and Nature Writing (October 2012), The Honest Truth About Dishonesty (June 2012), The Upside of Irrationality Irrational (February 2008), The Joy of Experimental Psychology (in partnership with Christine Hughes and David Eckerman, 1998). He has more than 120 published articles, among them: “Three Principles to REVISE People’s Unethical Behavior”, “Ethical Dissonance, Justifications, and Moral Behavior”, “Self-serving Altruism? The Lure of Unethical Actions that Benefit Others”, “Signing at the Beginning Makes Ethics Salient and Decreases Dishonest Self-Reports in Comparison to Signing at the End, “” Contagion and Differentiation in Unethical Behavior: The Effect of One Bad Apple on the Barrel. ” his experiments, does not only contribute to the areas of psychology and behavioral economics, it also contributes to studies on ethics, presenting data relevant to this field.